31 Days of Halloween Tales - The Secret 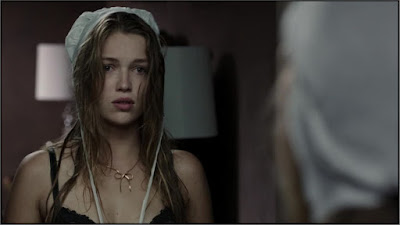 
Sarah hid in the small cupboard beneath the stairs, her ears and eyes strained on the visitor that had come to speak to her Mamm.
"Mrs. Beiler, I don’t mean to offend but perhaps Sarah's sister would be more suitable to raise the child."
Hannah Beiler shook her head solemnly and looked out of the kitchen window.
"No Bishop, that simply would not do, Mary is already overburdened.  I cannot ask that of Mary and I certainly would not ask that of Sarah.  No matter what, the child is a child of God and shall be cared for."  She turned and looked directly at the Bishop. He looked tired and the birthmark beneath his ear became more prominent the more irritated he became.
"Well, perhaps someone in another town then." His words were caring but his eyes were cold.  Bishop Miller looked at Hannah and realized he was fighting a losing battle at the moment.  He rose from his chair and touched Hannah’s hand. "Of course we will do as you wish but please give this some more thought before you make a final decision.  I will help in anyway that I can but a fatherless child, well Hannah, you know the church's opinion on that matter."
Bishop Miller gently patted her hand and turned towards the door.  He leaned over and spoke to Hannah gently.  " I will speak to you at the Church service tomorrow and you can let me know what will be done."
Hannah looked at his face and smiled sadly.  "Thank you Bishop, we will speak to you then," and she closed the door behind him as he stepped out into the afternoon sun.
Hannah turned and walked slowly into the family room.  She sat down in her rocking chair, pulled the worn quilt around her and wept quietly as the afternoon sun warmed her.
Sarah slowly opened the closet door.  She tiptoed down the hall and peeked in at her mother sitting in the oversized chair.  For as long as Sarah could remember that chair had been a place of solace and comfort for all the women of the Beiler family.  Her mother had rocked Sarah and her sister Mary until they were too big to fit on her lap and now all three enjoyed taking turns in the chair in the afternoon when the sun shown most brightly through the large picture window, warming whomever was seated there.  It surprised Sarah to see her Mamm crying and she didn't know what to do.  She wanted to go and comfort her but she did not want her Mamm to know she had been eavesdropping in on her private conversation, especially when Sarah was the topic.
She turned around and slipped quietly outside.
The short walk to the barn seemed eternal that afternoon and the large doors seemed extra heavy.  Once Sarah was sheltered in the cool darkness she sat down to think.  The same two questions kept going around and around inside of her young mind.  What is so terrible?  What could be done about it?   Sarah contemplated for hours until her head hurt.  Then she contemplated some more.
The next day was Sunday and the weekly church service was to be held at the home of the Gustafson's.  Sarah awoke very early and dressed carefully in her best Sunday dress.  She pulled her new prayer kapp from her closet and placed it gently on her head.  She quietly opened her bedroom door, tiptoed past her parent's bedroom and with a prayer under her breath that they were still asleep, she slipped out the door.  The sun rose quickly and Sarah knew she had to hurry, so much needed to be done.

Hannah and Jacob arrived home that afternoon, slightly disturbed but somewhat relieved.  They had been spared another conversation with Bishop Miller for now but they both knew it would be just a matter of time before they would have to speak with him again.  The Bishop had not been at the service this morning and there were whispers that he had been taken ill.  What also bothered the couple was that their youngest daughter had not arrived for the service either.  It wasn't the first occasion Sarah had gone out into the woods, lost track of time and shown up hours later dirty and hungry but because of her daughter's delicate condition Hannah worried more than usual.  There was a chill in the air this afternoon and even though it was only October, it felt like there could be an early snow.
Sarah walked slowly towards home, the wind whipping her long skirt about as she struggled to keep her shawl around her shoulders. Her braided hair was coming out in long unbridled strands and she shoved the wayward pieces roughly behind her ears, cursing it with each step. She'd lost her prayer kapp again and her Mamm would be real angry with her. The dry autumn leaves went swirling about her feet as she walked and Sarah remarked to herself that there were far too many leaves on the ground already. She walked slowly thinking of the Bishop’s words of the previous day when he’d said she was too simple-minded to care for a baby.  Sarah had proven him wrong of course.  He discovered that she is clever, very clever indeed.  Her stomach growled and she thought of the freshly baked cookies that would be waiting for her, Sarah pulled her shawl tightly about her and started to run.
Winter came early that year.  By Thanksgiving there was almost a foot of snow covering the Pennsylvania hills.  Sarah began to show and she positively gleamed with motherhood.  Her mother and her sister began to make quilts, clothing and kapps for the baby and Jacob worked on a cradle for his newest grandchild.  A new Bishop arrived at the end of October without explanation and by Christmas everyone stopped wondering what had happened to Bishop Miller.  His belongings were packed away in case he returned for them and a prayer said for his safety.   Winter turned into spring and Sarah's baby was born, a beautiful baby boy whom she named Thomas after her grandfather. Everyone thought Thomas was perfect so no one took any notice of the small faint birthmark under Thomas' left ear.
Time went by and no one worried where Sarah went when she disappeared for hours at a time. Nor did anyone ever notice the large pile of dead leaves placed carefully in the middle of woods next to the river.
If someone were to notice or take the time to look there and brush some of the leaves away, they would see the faint, white remains of some bones, and entangled within the bones, a small faded piece of fabric.
The type and color of fabric that one might find in a girl's prayer kapp.