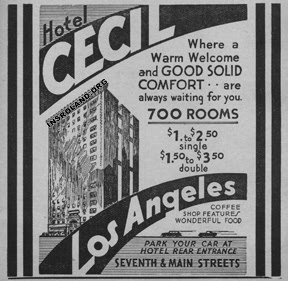 I got a little hung up on the characters so another tale of two sisters entitled:


"Are you sure this is the right place, Dee?

Lori's distrusting tone set me on edge and we had only just arrived.

"Okay, so it's not the Ritz Carlton but it's cheap and it had some decent reviews on Yelp."

Alright, I might have been fibbing about that part a bit. There were a couple of not bad reviews but a whole lot more of DON'T STAY HERE reviews. Fortunately for me Lori isn't that keen on the internet and with four kids she hardly has the time to browse.

The fact was, I wanted to stay here because of the hotel's history. I mean, serial killers, suicides, and strange murders?? Who wouldn't jump at the chance?

"Someone just asked me if I was 'holding'.  Holding.  What do you think he meant?"

Yes, so it's a place frequented by junkies and drug dealers as well. I didn't think we looked like either one so I thought we would be okay. Yeah, I guess Iwas wrong about that.

"Who knows? Let's go get checked in. I can't wait to see the inside!"

Lori was still scrutinzing the addict sitting outside when I opened the door and we stepped inside the lobby.

"God Dee! This place is gorgeous!Are you sure this is the right place? Are you sure you got the price right?"

Even I had to admit that the lobby was stunning, a beautiful throwback to the elegance of the early 1900's when it was built. You could imagine Carol Lombard and Clark Gable strolling across the gleaming tiled floor on their way to check in after attending some Hollywood bash in the ballroom downstairs.

I was more than a little disappointed.

I heard Lori giggle slightly, irritating me even more and I snapped. "Let's just go get checked in, okay?"

My sister's tone  changed immediately. I should know better than to show my hand too early with her.

"Dee, What's going on? You selected this place and now you don't want to stay here?"

"But that isn't what you expected was it? What exactly were you expecting, Dee? Tell me why you picked this place right now."

I walked away without answering, leaving her behind as I went up to the front desk and checked us in before she could change her mind.

"This place is pretty awful, Dee."

Lori was right. While it was pretty much as clean as any other hotel I have ever been in, it was absolutely prehistoric. When was the last time I saw a television with a tube in it? Fifteen, twenty years before? I couldn't remember but it had been a long time before today. It was shocking but not nearly  as shocking as the fact that it still worked.

The ancient television was mildly interesting but it was the cold that got my attention.  Lori called down to the lobby about the coldness of the room only to discover our phone didn't work either. She declined to return down in the elevator by herself and we suffered until we figured the thermostat out by ourselves.

All in all, it was a old room but I knew that wasn't what Dee was referring to when she commented about it being awful.

I noticed it first in the elevator, the bone chilling dampness of the place. I know Dee noticed it too, her teeth were chatteirng loud enough to wake the dead but since we weren't alone as we rode up to the fourteenth floor (actually the thirteenth but who is counting?) she had the common courtesy not to mention it in front of the other hotel guests.

As we stepped out onto our floor the doors closing silently behind us, my sister whispered,"Dee, who was that in the elevator?"

"How would I know? I don't know anyone else who is staying here."

"They looked familiar to me. I don't know why."

I knew why. Anyone who watched the news in the last fifty years knew why but I didn't want to say just yet. However, as usual, my silence was like an alarm going off in Lori's head and she wasn't letting it go.

"Dee? Who were they? Why are we here at this hotel?"

Damn it. I could have tried to lie a little bit longer but it seemed less than worth the effort..

"It's supposed to be haunted. Remember the Elisa Lam disappearance and the weird video?"

"Okay, well, I can't tell you that. But we did already pay for two nights so we are staying."

Lori stopped walking and was silent for a moment.  Then she asked me what I hoped she wouldn't.

"Deidre,who was the guy with her? I recognize him too. I have a feeling I should know who he is."

Like I said, I knew the history of the hotel.

"I think it was Richard Rameriz."

Well, I was hoping she wasn't aware of who he was but I probably should have known better.

We are Van Helsings after all.