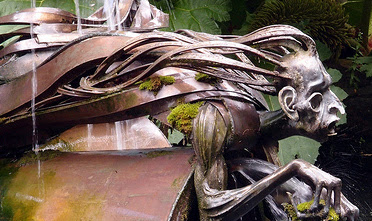 He'll bubble your nose and bubble your chin,
It's so much fun when you hop in with.. Mr. Bubble.

Beth grinned to herself as she finished tucking in her son for the night. "I don't see him because I am a grown-up and I'm not supposed to see your invisible friends."

Jeffrey wasn't quite sure that was the truth but he wished his mom could see Mr. Bubbles.

Jeffrey played enough of the War of Worlds video game to be able to recognize a supernatural creature when he saw one and he was pretty sure that Mr. Bubbles was in fact, a water goblin.  Either way he wasn't invisible and he most certainly wasn't any friend of his.

Mr. Bubbles lived under the sink in his bathroom and liked to cause trouble.

Bad things had been happening since the appearance of Mr. Bubbles. His parents believed they were just having a run of bad luck but Jeffrey knew better. He tried to tell them about Mr. Bubbles and for a time they even pretended to believe him. Jeffrey knew however, they weren't taking him seriously.

At first Jeffrey tried to ignore Mr. Bubbles and for awhile he managed to do a pretty good job of it. Or at least until their dog Hero suddenly became sick and nearly died.

That was too much even for Jeffrey and he decided it was time to do something, dangerous or not.

That night, after everyone went to bed, Jeffrey snuck a pair of his dad's dirty socks out of the hamper and set the trap.

Beth smiled as she watched her son digging outside in the yard. He was burying an old shoe box out near her flower bed.

"Buried treasure no doubt," she said to her husband. "At least he's outside getting some fresh air instead of playing video games for a change."

Rich watched his son spitting on the mound of dirt and wondered exactly what was in the box his son had buried in their yard.

He thought about the socks he saw in the laundry that morning. They were a light gray, old and faded. He had worn them on Monday he thought and then thrown them in the hamper when he got home that evening. And he was pretty sure they were fine when he tossed them in there.

But this morning when he took the clothes out to the laundry room, he could swear that he could see what looked like several tiny bloody footprints on that same pair of gray socks.

Footprints that didn't look exactly human or exactly animal. Footprints like he had never seen before.

He thought about asking Jeffrey about them and about the box in the yard but as he watched his son spit on the mound again, he decided he probably didn't want to know after all.