31 Days of Halloween Tales - The Door 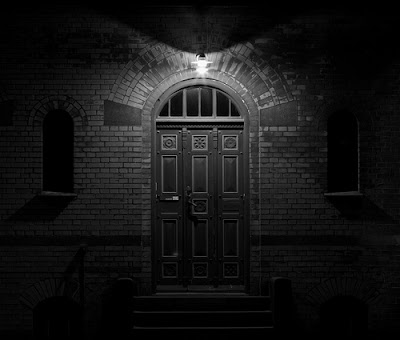 Yesterday, upon the stair,
I met a man who wasn’t there
He wasn’t there again today
I wish, I wish he’d go away...
Antigonish - William Hughes Mearns

I don’t know what made me notice The Door.

I suppose it had always been there, quietly waiting for me to become aware of it. I am relatively sure that I have passed by the door quite often since it is on my way, but somehow I always missed it. I find it strange how we go about our daily business, our clever rituals, eyes straight ahead of us, never peeking off to the side, to the dark corners. We spend years staying in line, never straying, never veering.

That is how I was, shipshape, my ducks all in a row. Or so I thought. Until yesterday.

Yesterday, I saw The Door.

The day started out like every other day for me with no hint of what was to come. I’ve heard people say that you get a premonition, a feeling of déjà vu right before you are slammed with a traumatic event out of nowhere but nothing like that happened to me. There was no glimpse, no feeling of “I oughta stay in bed today,” nothing. Just the old, “same shit, different day,” kinda feeling, you know, where your whole life looks like a big pile of crap laid out in front of you and you can’t find a shovel.

But now I am getting off the subject, I wanna tell you about The Door. I think I need to, just in case.

So, I’m on my way home from work, I walk you see. It’s only a half a dozen blocks and as long as the weather holds out, I can make it in just a few minutes. I work in a bank, back in the accounting department, back where I don’t see too many folks.

That’s just fine by me though, I like being alone.

Anyway, it’s a nice afternoon, an Indian Summer kind of day when the warmth of sun still heats up the sidewalk and you can shed your jacket onto the hook of your finger.  I’m walking down the sidewalk, carefully avoiding the jagged, crooked cracks as always, when I see something out of the corner of my eye. I can tell I’m in front of Dillon’s Bookstore because I always have to walk around the Fedex drop off box they got in front of the place so I stop and take a look in the display window.

They always put the new releases out in front, carefully stacked up with a shiny new copy leaned up against the tower-o-books so you can see the cover. They added a new book since I went by that morning and I picked it out right away.

I guess I need to make it clear that I notice things, I’m real observant and that is why this whole thing with The Door doesn’t make sense. If it was there before, I would have seen it, should have seen it. But I didn’t.

So anyway, I’m standing in front of Dillon’s Bookstore admiring the flashy new copy of Stephen King’s latest novel that’s perched seductively in the window when I notice an odd reflection in the glass pane. At first it’s not clear, sorta like looking at your hand when you hold it beneath the beachwater down on the Jersey shore, wavy and slightly out of focus, you know what I mean. So I stare at it, trying to getting a better look at it.  The books in the window slowly disappear into a gray nothingness and all I see is the fuzzy reflection. It’s strange, I can’t seem to stop trying to figure out exactly what the hell it is, it’s like I am hypnotized or something.

I know what you are saying now, why didn’t I just turn around and look?

You see, I knew what was behind me. There’s nothing. It’s a vacant lot, been vacant for the twenty years that I’ve lived here on Market Street, so I know there ain’t nothing behind me.  My parents lived over on Main Street when I was growing up and I walked by that vacant lot every day on my way to school too. I’ve seen folks try to build on that lot over the years but it never works for some reason. “That dog don’t bark,” my mother used to say. The lot’s empty, been empty for as long as I been around and probably a long time before that.

But nonetheless the reflection in the window begged to differ with me. There was something there where there shouldn’t have been.  Something big, something black and I just could not take my eyes off of it so I just kept staring at it until it finally became clear in the glass window.

It was a door.

But it isn’t like it was floating there in mid-air or nothing like that. It seemed solid, grounded, not like you could see the building that it’s attached to but you know the building is there just the same. There are gray steps made of large curved stone leading up to the door and you can even imagine a flagstone walk leading up to those stairs from the sidewalk although none exists, not in this world anyway.

Okay, so I see the door and it’s a big mother f-----g door too.  It’s made of wood, I can tell this even in the reflection and it looks like it’s about a foot thick and at least twenty feet high.  The Door is black, blacker than the ace of spades as my mother would say and there is some kind of weird symbol carved into it. I think I’ve seen that symbol somewhere before so I’m standing there trying to remember where I’ve seen the damn thing, the warm afternoon still shining hot against the side of my face when the air against my back suddenly becomes cold like somebody just opened a refrigerator door behind me. I can also smell the putrid stench of sulfur and I gag as I watch The Door crawl open.

I didn’t hear The Door screech or yowl as it opened into the sun on Market Street on that beautiful afternoon, not with my ears anyway, but I knew that it did nonetheless.

Now you would have thought I would have turned around about then, just to take a peek but I have to tell you, by this point I was too friggin scared to look at The Door straight on.  I was afraid of it actually being there or worse than that, that it would disappear if I looked away from the glass. I wanted to close my eyes more than anything but I wanted to keep watching even more. It was like driving by a nasty car accident on Interstate 95, you don’t really want to look at the mangled twisted metal and crushed bodies but you just can’t stop yourself. So I just kept on staring.

At first the immense doorway was empty, all I could see beyond the threshold was darkness. It looked like midnight inside there, like a bottomless pit of despair I thought. Then suddenly it seemed to fill up with something much blacker than the emptiness I saw before.

Well, I use that term lightly here, the figure appeared male at least but it filled the massive doorway up with not only it’s enormity but also with it’s mere presence. There was more than just size to him, he was just more there.

He had dark hair, coal black above an ashen face that appeared so pale that if he wasn’t dead, he was missing a hell of an opportunity. His eyes burned red and seemed to glow inside of his skull as he stared at me across the empty street. And there was no doubt he was looking at me, after all, I was the only one that could see him and when he smiled at me I felt something warm run down the inside of my leg.

There were teeth in that smile. Lots of them, ugly, yellow bits of crooked bone that looked as if someone had intentionally pulled them out one by one with a pair of rusty pliers then stuck them back in upside down and sideways. The jagged teeth poked out over blood red gums and too full lips in a ghastly death grin and I saw his mouth open to speak.

In the silence inside my head I heard him call my name then everything was gone.

I don’t know how long I lay on the sidewalk before Mr. Dillon woke me up.  It couldn’t have been all that long, the sun was still shining when I opened my eyes. I slowly sat up and felt the dampness of my wet slacks against my inner thigh, thankful that my pants were black and hoping that Mr. Dillon couldn’t smell it. He asked me if I was alright and I told him I thought so.

Yes, I lied to him. I was anything but alright, in fact, I was scared shitless but I didn’t want Mr. Dillon, who always looked like Wilford Brimley to me, to think I was crazy so I told him I was just fine, a little lightheaded from skipping lunch that’s all. Mr. Dillon looked at me a little suspiciously but took me by the arm and shoulder and got me to my feet anyway. I smiled my best fake smile, thanked him for his help and patted his shoulder as I started walking off towards home again.

I didn’t look back at the window of the bookstore and I didn’t look across the street at the vacant lot. I didn’t need to. I know The Door is there. Waiting for me to come by again. Maybe next time the man will invite me inside. I don’t know but perhaps tomorrow I will find out.

Today is Sunday you see, and today I don’t have to make the walk down Market Street to go to work. Today I can stay inside and pretend that I didn't see the door or the man that wasn't there.

But tomorrow is Monday, and tomorrow I won't have a choice.

Email ThisBlogThis!Share to TwitterShare to FacebookShare to Pinterest
Labels: 31 Days of Halloween, Antigonish, Hell's Door, the man who wasn't there